“All the Tears in the World: Songs of Hope and Courage” –Bett Padgett

Multi talented singer-songwriter Bett Padgett will release her 7th and latest cd on September 10th. Bett was my guitar teacher for many years when I lived in Raleigh. I visited with her this past week with Chuckles since we are staying in town for his treatments as many of you know. I credit Bett with providing me with the skills and confidence I needed to finally write my own songs. She is the one who unlocked the door for me and for that I will always be grateful. No doubt she has done the same for countless other students as she has been teaching guitar for 30 years in Raleigh!

I was lucky enough to have Bett play for me on her celtic harp!

Originally from Durham, and a musical family, (just like me) Bett has been playing guitar since she was 11. She also teaches mandolin, banjo and ukulele. Bett is a prolific song writer who weaves stories about life experiences and emotions common to us all. “Although dealing with tough topics, there is optimism and courage in each song.”

Bett playing a song from her new cd

David Roth says, ““For me listening to Bett’s new recording is to enjoy fine songwriting, thoughtful arrangements, and a voice that is at times reminiscent of Mary Travers, but best of all, Bett herself. She sings with conviction and connection to what she’s writing about. Who could ask for more?”

Well, how about the fact that she plays almost all of the instruments on her recordings!

Bett’s music is making waves in the folk music scene across the country. You may listen to cuts on Soundcloud for samples of the CD and some previous albums as well. To learn more about Bett and her music and other goings on in Raleigh music check out her website http://www.bettpadgett.com/ceilidhe-music/ceilidhe-music.php.

There is something weird about booking a hotel in your hometown. It’s like going on vacation where you once lived. That’s how I’m feeling about staying at the Ramada Inn, my home away from home for the next month. Frumpy, even when it was newly built in 1986, the Ramada’s decor and design feel tired and sad after 30 years of wear and tear. So I felt a bit depressed when I arrived last Monday evening and opened the door to my musty room. 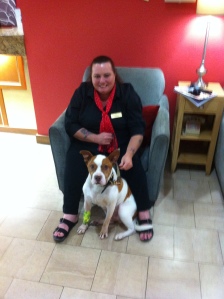 But I am grateful for the Ramada. The hotel is located within walking distance to the NCSU vet school where Chuckles is receiving his radiation treatments. They also let your dog stay with you at a discounted room rate. All the staff are very friendly and seem to love dogs, another plus.

While unloading the car I met some fellow guests, Jeff and Laura, and their dog Cayden, an adorable Welsh Corgi. It was Cayden’s last week of his 4 week radiation protocol, the same treatment that Chuckles will be receiving. He looked great and Jeff and Laura said that he had tolerated the radiation quite well with no major side effects. Our conversation left me feeling encouraged for what lies ahead for me and Chuckles.

Laura and Jeff from Tennessee with their dog Cayden

On Tuesday morning we arrived at the Oncology Department for Chuckles’s MRI and CT scan. The very first person I saw when we walked in was Patti, a volunteer at the vet school who I’d met 4 years ago when Chuckles was a patient there for a different medical problem. Patti recognized us immediately and we had a sweet reunion. 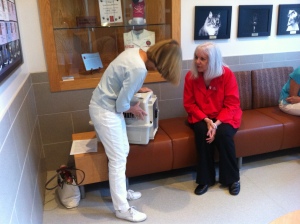 Patti in her red volunteer jacket chats with a cat owner

As a volunteer, Patti walks the hallways of the hospital chatting with waiting and anxious pet owners, consoling and helping wherever she can. She is a calm and comforting presence who has herself been a client and can relate with the emotional train wreck of having a beloved pet who is very sick.

Good news with the MRI showed that the blood surrounding Chuckles’s tumor had all been reabsorbed. He received his first dose of radiation on Thursday and a second dose on Friday without incident. Unfortunately he must be anesthetized each time, as a dog cannot remain perfectly still for the radiation. To save  time, an IV port for the anesthesia was put in his back leg for subsequent treatments.

All of the doctors and technicians are very kind and compassionate, not to mention board certified in their fields of medicine. I know that Chuckles is in the best of hands receiving the best of care.

Just a few of the portraits

The walls of the waiting area and back hallways of the Oncology ward are lined with portraits of cats and dogs who have been successfully treated as cancer patients there. The hope is that they will encourage others to not lose hope. Their sweet faces are testimony to their resilience and to the love and dedication of their owners. A love that never dies.

Chuckles is going to receive radiation treatments for his brain tumor. On Tuesday of next week, he will have another MRI and a CT scan to map the tumor for the radiation. If all goes well, they will begin treatment within 2 days. The protocol is for a total of 20 treatments,  given once daily, Monday through Friday for 4 weeks. Each one hits the tumor with a small dose of radiation.

After the 2 hour consult on Monday with his radiation oncologist, I left feeling overwhelmed. So much to absorb and consider.  But by Wednesday I made the decision to go forward with treatment. When I looked at him lying in his bed, subdued but still so full of life, I knew that I could not do nothing. I realized that while there is risk, there is also a chance that he could have a good outcome. If I do nothing, there is no chance at all. 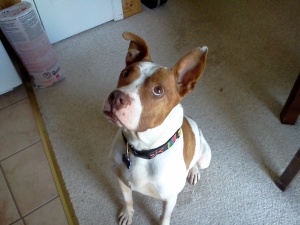 Who could say no to that face?

Even though it was a big relief just to make the decision, we’ve got a long way to go yet. The radiation could make the tumor bleed again. He could have a seisure. Each treatment requires him to be anesthetized, which is a risk in and of itself. But it’s like reading the side effects of your medication. If you worry about each one you’ll probably never take it! Once I stopped focusing on what could go wrong and started focusing on what could go right, the way became clear.

Then too, I know myself, and I know that I would regret not doing all that I could within reason. Living with regret is a lot tougher, and lingers longer, than accepting a loss. All of my friends have been so supportive of my decision and tell me that I am doing the right thing. And in my heart I know it’s true.

Here is the video I made with my sweet Chuckles!

One of the neat things about keeping a journal is the ability to go back in time and check in with how you were feeling at a previous point in time as recorded in your own words. Sometimes I am pleasantly surprised to recall people and happy events that I have forgotten. Sometimes I can’t believe how silly and childish my reactions sound in hindsight. And sometimes I am forced to re-live excruciatingly painful memories of heartbreak, loneliness and despair. 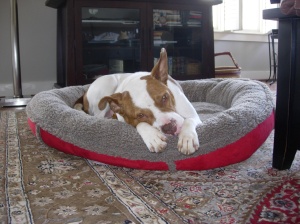 A few weeks ago I was revisiting my life in July of 2015. It was a particularly awful summer full of sadness and broken dreams. One I wish I could forget. I don’t need a journal entry to remember how I was feeling back then. But I wanted to read about those experiences simply to celebrate the fact that I had survived them. I lived through all that bad stuff and made it to the other side. I didn’t do it alone. I had the help of friends and family and through it all my one constant companion, Chuckles.

No sooner had I recorded in my journal my gratefulness and relief at having that terrible summer behind me when….. I learned on July 21st that Chuckles has a brain tumor. The symptoms that led to his diagnosis began suddenly and acutely on the 19th. I went into crisis mode that evening with 3 trips to the vet in 12 hours, including one at midnight, followed by an excruciating 3 hour drive to the NCSU College of Veterinary Medicine the next day.

What began as his moaning in the night escalated into an unrelenting shrill bark that I interpreted as pain. Fearful that he was not stable enough to make it to Raleigh a friend helped me find a veterinary office along Interstate 40 in one of the most rural counties in N.C. where he was examined again. I was told to keep going, but sedation for Chuckles was not possible.

After 2 hours of waiting in admissions where I could still hear Chuckles’s distressing bark coming from the ER, a trauma doctor came out and told me that Chuckles most likely had a neurological problem and they were going to have him examined by a Neurologist. This next consult confirmed the trauma team’s suspicion that the barking, pacing, panting and Chuckles’s “fish eyed” gaze were all stemming from his disorientation, a distortion in his brain. An MRI was scheduled for the next morning. 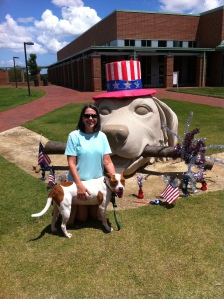 The imaging revealed a tumor on Chuckles’s pituitary gland, a gland that sits at the base of the brain. For some unknown reason it had begun to bleed which caused the sudden onset of his symptoms. The hematoma around the tumor caused swelling that was putting pressure on his brain. Pressure on the pituitary also created a very rare condition called Diabetes Insipidus. He was treated with steroids for the inflammation and a synthetic hormone for the diabetes. After 4 nights in ICU Chuckles was stable enough to return home with me.

The first few days back home were rough. He was extremely disoriented outside, like an Alzheimer’s patient. Gradually he has become more like himself but still I see the evidence of something wrong. He does not want to go for walks, he has some weakness in his back legs and is losing muscle mass. Overall Chuckles just seems “dull.”

On Monday, I will take him back to the Vet School for a consult with Radiation Oncology to learn their recommendations for treatment. I am told that dogs tolerate radiation well and that the treatment yields good success rates. They will discuss with me the various options for administering radiation, and of course, discuss his prognosis with and without treatment. 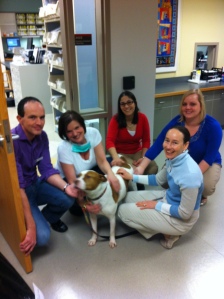 Ever since I got home I haven’t been able to concentrate on anything including my cd project. It has been difficult to pick up where I left off on the afternoon of July 19th. Now that the shock and the immediate stress have passed I’m entering into the grief process. But I’m learning to be kind and patient with myself knowing that my enthusiasm for my writing and my music will return given time.

Thanks to everyone who has helped me through this difficult time.