To know a mockingbird, is to be inspired. Every morning while I sit on my back porch with my cup of coffee I am serenaded by an enthusiastic mockingbird cycling through his extensive repertoire of songs. And it’s quite impressive. From atop the highest limb of a tree, he sings his heart out creating the illusion that my backyard is filled with an incredible number of different species of birds.

I am suddenly reminded of a report I wrote about the Mockingbird in grammar school. These feisty, clever birds, have an amazing ability to mock or mimic numerous other birds’ calls as well as duplicate the sounds of insects and frogs. They can even imitate human made sounds like the beeping of a garbage truck backing up. Here is a great recording of a mockingbird serenade.

Long admired for their musical prowess, these wild birds were popular as cage birds in the U.S. during the 19th century. So popular in fact that their numbers dwindled greatly along the East Coast. Adults were captured, as well as fledglings from the nest. A talented singer could sell for as much as $50, a hefty sum for the time period.

Perhaps then, it’s no coincidence that one of the most popular songs during the Civil War era was “Listen To The Mockingbird,” written in 1855. The music was composed by an African-American named Richard Milburn and the lyrics were written by Septimus Winner under the nom de plume, Alice Hawthorne, (his wife). 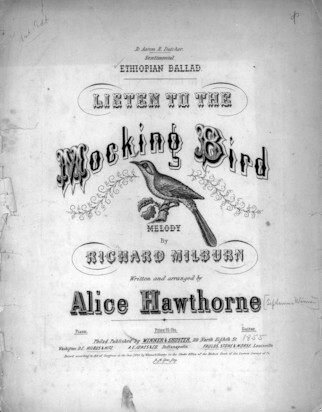 The song’s lively, happy melody belies its sad subject matter. A forlorn man is remembering his true love, Halley, who lies “sleeping in the valley.” While he grieves her loss the mockingbird is “singing oe’r her grave” faithfully, day and night.

To people of both the North and the South, “Mockingbird’s” theme of love and loss was especially poignant, as many a true love perished during the war. According to the New York Times, (November 5, 2013) it was such a big hit that 20 million copies of the sheet music were sold! It was apparently well-known that the song was one of Abraham Lincoln’s favorites.

“Listen To The Mockingbird” is still loved today and is considered a Bluegrass standard.  In 2013, Dolly Parton and Stuart Duncan recorded it for the album Divided and United: The Songs of the Civil War. Dolly’s tremulous harmonies on the chorus evoke the sweet lilt of a bird’s song. If you’d like to give it a listen here is the link:

But back to my mockingbird. It’s been a long time since my fourth grade report so I decided to refresh my knowledge. According to the Cornell Ornithology Lab, a mockingbird continues learning new songs over his or her entire life span and can learn as many as 200 different calls, songs and sounds! Amazing! They just keep adding to their repertoire. They are life-long learners, something I strive to be. I knew there was a reason I thought these birds were so special, even as a child.  I encourage you to stop and listen, and get to know a mockingbird in your own back yard and maybe you’ll be inspired too.

4 thoughts on “To Know A Mockingbird”