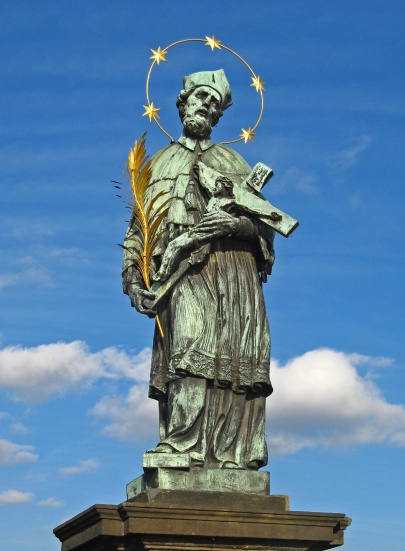 Unless you’ve been to Prague, you’ve probably never heard of Saint John of Nepomuk (Jan Nepomucký in Czech), a Bohemian saint, who was drowned in the Vltava River in 1393 by order of the King of Bohemia. His offense you ask? According to legend, he defied the King on two occasions. Once by refusing to divulge the secret confessions of the Queen, (as a priest he was her confessor), and then again by refusing to make an ecclesiastical appointment favored by the King. Historians now believe that these were once two separate stories involving two different Johns, but once a story becomes legend, people aren’t too concerned about historical accuracy.

In any event, what remains well documented is that John of Nepomuk was tortured, bound in chains, and thrown over the famous Charles Bridge that crosses the Vltava River in the heart of  Old Town. If you have been to Prague, you will most certainly have walked this bridge and discovered a statue honoring St. John high above you. Erected in 1683, it is easy to spot his statue among the 29 others lining the bridge due to the throngs of tourists around it, and because of the trademark five star halo which he wears. It is said that five stars appeared and hovered over the water the night he was drowned. 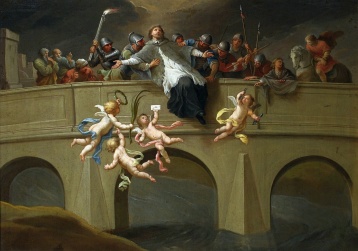 John of Nepomuk was canonized by the Catholic Church in 1729, and not surprisingly, he became the Patron Saint of confessors, bridges, and waterways. His feast day is May 16th, and during the Baroque era he was quite the celebrity. Pilgrims travelled to Prague from all across Europe for one of the biggest church celebrations of the year, honoring him with music and a fire show.

In subsequent years, his popularity waned, but it now enjoys a resurgence with a modern makeover. On May 15th, the eve of Saint John’s feast day, the city hosts a no holds barred extravaganza. A mass at St. Vitus’s Cathedral is followed by a procession down the Royal Route and then onto the Charles Bridge, stopping at his famous statue. The celebration continues out on the water with a boat regatta, parachutists, swimmers, and a concert performed on a barge. The final spectacle is of course, fireworks over the river illuminating the ancient city.

The event is now so popular with locals and tourists alike that their throngs make the bridge impassable. Perhaps you have experienced a similar phenomena somewhere in your own travels, or maybe even close to home? Destinations clogged with tourists, and public events that have grown in attendance to the point that they are no longer enjoyable. Like a beautiful river until it swells and floods its banks.

Certainly, the world’s population is growing, and the internet, along with modern conveniences, have made travel more accessible. But there also seem to be a lot of hungry people afoot in the world searching for experiences that “mean something.” Experiences that are rooted in history and are rich in tradition.

Pondering all the hoopla surrounding this little known “martyr of the confessional” reminded me of another legend that has people flocking to bridges these days, eager to make a public confession of their own. In November of 2015, I was walking across the Brooklyn Bridge in New York City when I noticed an odd assortment of padlocks, in every color, size, and shape hanging from the bridge’s cabling.

I learned that these were “love locks,” put there by paramours to symbolize their unbreakable love and as a kind of talisman against the dissolution of their relationships. I later learned that the Brooklyn Bridge locks were part of a love lock epidemic spread across the globe.

According to Wikipedia, the love lock tradition dates back about 100 years to a Serbian love story. A young woman named Nada falls in love with, and becomes engaged to a young man named Relja. But Relja proves unfaithful when he goes off to war, falling in love with another woman. Upon hearing the news, Nada dies of a broken heart. As a protection against a similar fate, young women of the town began writing down their names and those of their lovers’ on padlocks, and then attaching the locks to the bridge where Nada and Relja used to meet. 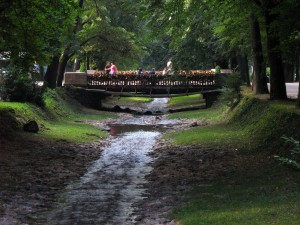 As a final safe guard, they tossed the key into the river where it could not be retrieved.

What began as a quaint and romantic custom, has now become a public nuisance in many major European cities. Just like coping with hordes of tourists, the proliferation of these locks are creating headaches for city leaders. The local citizenry complain that the locks are eyesores that destroy the architectural heritage and beauty of bridges.

Besides the aesthetics issue, there is a threat to the structural integrity of a bridge from the added weight. On May 9, 2014, the weight of padlocks on the Pont des Arts Bridge in Paris caused the collapse of part of the parapet. When officials took down all the locks on the bridge, they weighed in at 45 tons.

Some people blame the current craze on a 2006 Italian book turned popular movie called “I Want You” in which a couple put a love lock on a lamppost on Rome’s 2100 year old Ponte Milvio Bridge. Harmless enough when on person does it, but of course not so harmless when thousands do. The poor lamppost finally gave way from the weight of all this love, prompting officials to start imposing a fine of 50 Euros on anyone caught attaching a love lock to any part of the bridge. Indeed, in more and more cities, the locks are considered vandalism and are regularly removed with bolt cutters and hacksaws.

It will come as no surprise to you that love locks have made their way onto the Charles Bridge in Prague. A large majority of these have been attached to the fence like grille work on the parapet that marks the spot where John of Nepomuk was thrown into the water.

This seems a logical place considering love locks would most certainly fall under his jurisdiction as patron saint of both confessors and bridges. Considering the intersection of these two stories made me wonder what secret confessions he took to his watery grave and what he might think about all of these public confessions of love without repercussion. How times change.

Of course, city workers regularly come and remove the Charles Bridge love locks, and for all I know, they probably end up in a landfill.  I wonder what that might mean for the durability of the relationships these locks symbolized. Did someone somewhere in the world feel a twinge of misgiving when the bolt cutter callously snapped their lock’s bond?

Perhaps it is time for a new tradition that might satisfy everyone: lovers, locals, city governments, and the environment. I propose that sweethearts take a lock of each others hair and intertwine them, offer up a prayer of safekeeping to St. John, and then let their locks float down into the water. Hair is weightless, biodegradable, and requires a sacrifice from both parties. Padlocks are here today, gone tomorrow, but John of Nepomuk has staying power. He is still going strong after 500 years. It might just work. 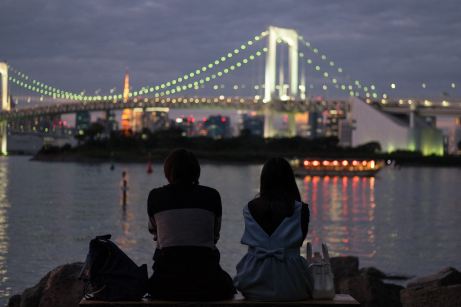